Ever since reading Janette Sadik-Khan’s book Streetfight, I’ve been looking forward to biking in New York City. The book recapped the gruelling efforts and leadership put in by Janette and her team in the city government to begin carving out street space for bikes and people, in a city whose streets are dominated by cars. The book gave me a pretty optimistic idea of what cycling in NY would be like; especially after experiencing world-class infrastructure in the Netherlands, I was imagining fully separated infrastructure and easy riding to all the key destinations in the city.

There are many reasons why I love travelling and exploring cities by bicycle. Moving slower than a car, it’s easier to capture my surroundings, like parks and cool cafes. No need to find parking means I can travel unencumbered (especially with bike share). Finally, riding a bike in any North American city requires constant attention and focus (for safety reasons), so I become immersed in the city and its interactions.

Recently, I finally had a chance to experience biking in New York first-hand during a free day on a recent visit to the city. I bought a day pass for the CitiBike Bike Share (for just $14) and set out on a day-long adventure across Manhattan and some of its boroughs. In short, bicycling in New York is chaos; it’s beyond anything I’ve experienced in Toronto, which by comparison seems like a Canadian politeness contest. 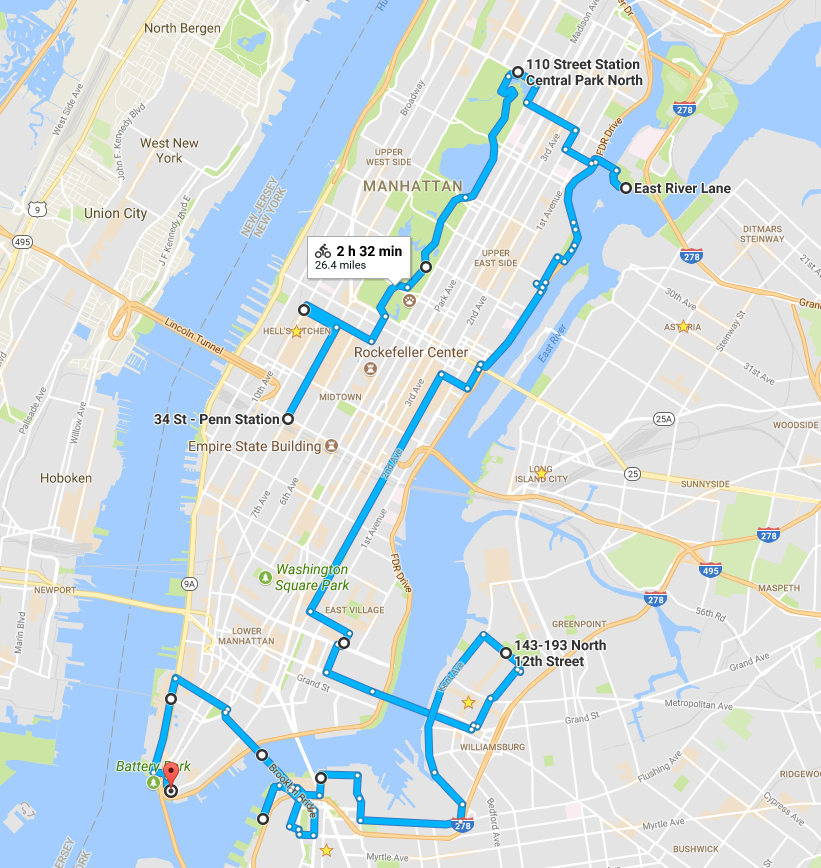 Here’s a few of my takeaways from the experience.

Congestion and traffic brings out the worst in all of us and New York is no exception. Throughout the day, I experienced constant selfish and risky endeavors from all road users (cyclists included). Drivers turning right across my path, cutting each other off, pulling over in front of me, other cyclists passing or merging on my left and right without notice, running red lights and lots of pedestrians crossing on red lights or walking in bike lanes. It was very much an every-person-for-themselves situation.

For the transit capital of North America, NY is astoundingly car-centric. Multi-lane, one-way arterials make up most of Manhattan’s streets, with the city’s many bridges and highways bringing a significant amount of motor vehicle traffic into the city daily. This massive volume of cars is accommodated by providing parking on both sides of just about every street. Most of the side streets are made of one traffic lane with a lane of parked cars on each side. It’s an incredibly inefficient use of public space, especially in a place where space is so precious.

I felt right at home in Toronto on this point. New York has a number of far-reaching, protected bikeways which are almost amazing, until they abruptly disappear. Construction closures and illegally-parked vehicles created temporary blockages, but more frequent were interruptions in lanes that were clearly due to objections from a local business or institution. A police station, a hotel, a medical centre, and a freeway on-ramp were all examples I noticed throughout the day (the medical centre was particularly ironic). A bike network is only as safe as its weakest link, and if the weakest link is merging into a five-lane arterial for three blocks, safety is out of the question.

And then I Found Brooklyn

All of these interruptions and risks were starting to make me feel quite stressed (though I’ll admit I was still having a great time), and I thought I had just about finished my single-day judgement of New York, when I went to cross the Williamsburg Bridge into Brooklyn.

And that’s where it all changed. Crossing the bridge was a breeze (aside from the incline of course); there were signs directing me to it, and the crossing itself was a fully-separated bikeway retrofitted into the rafters of the bridge. Once in Williamsburg (a neighbourhood of Brooklyn), I was greeted by narrow, tree-lined streets and many more cyclists, these ones looking much more like the kind you’d find in Toronto’s Queen West neighbourhood – dressed casually, sometimes without helmets, and fairly gender-balanced.

All-in-all, it was a wonderful day, as I experienced cycling in New York (and the fantastic bike share) first hand, but NYC’s cycling culture has a long way to go. Discontinuous bike lanes and lack of enforcement force riders to take safety into their own hands, breeding a red-light-running, every-rider-for-themselves mentality. Until these issues are addressed, cycling will remain a fringe activity, done only by the “fast and fearless”.