I just returned from a week in beautiful, sunny Phoenix, AZ as a trip related to my final-year engineering capstone course. My group and I stayed in North Scottsdale, a very newly-developed area about 30 minutes north of downtown. One of the things I was looking forward to take part in during some spare time on my visit was some cycling around the city. A quick Google cycling map of the city was enough to leave me very impressed and excited about my trip:

I was looking forward to seeing lots of bike lanes and frequent cyclists. What I found when I arrived, however, was something quite different.

Cycling lanes were very frequent, but they were most commonly on dangerous, busy arterial roads. Three lanes of traffic each direction moving 60+km/h with very little separation between traffic and the bike lane left conditions very risky for anyone who tried to cycle. Not only that, but the bike lanes themselves were narrower than the ones in Hamilton. Over the five days spent in the area, I only saw a handful of cyclists on the roads.

So why the lack of interest? The weather certainly wasn’t an issue (25 C and sunny every day!). I believe that while having bike lanes is certainly a way to attract cyclists, they must also be built right. Bicycles don’t belong immediately alongside a road with high speed limits – infrastructure planning should focus on either building bike lanes on non-arterial roads, or providing more protection for cyclists from traffic. Consider this road in Copenhagen: 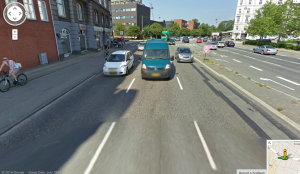 The road is still a busy arterial, the only difference is that the bike lane is elevated and clearly separated from the road. Or consider another interested design from Copenhagen: 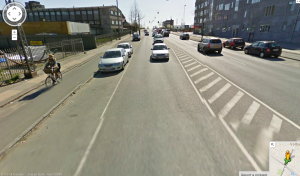 The infrastructure here is strategically designed so that parked vehicles actually protect cyclists! This is genius.

Now I certainly don’t want my judgement of North Scottsdale to extend to all of Phoenix – the city is actually currently working on a strategic plan to continually develop the city’s overall bike infrastructure. My point here is that unless lanes are built safely, they act as a liability to those who manage it, and a hazard to those who use it. A little bit of extra paved shoulder can go a long way!