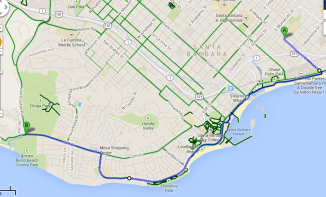 After the massive amount of exercise I had gotten Wednesday, I decided to take it a bit easier Thursday. After a lazy morning, around noon I headed out across town on a bike ride. I followed a great paved path along the beach, ventured up the Santa Barbara pier, and when the path ended I continued up the road to a fairly secluded beach hidden beneath a rocky cliff.

The pier was great! I learned that despite a couple catastrophic fires over the years, the pier had been rebuilt fully and now serves as more of a tourist attraction than anything else. There were restaurants, gift shops, and tour companies; there even was a parking lot at the end (which I thought might have been a bit unnecessary). The beach I arrived at was kind of hidden at the west end of the city under a large cliff run. I went for a walk, and found out that it was also an off-leash dog park; I really enjoyed seeing all the dogs having fun, and also missed my dog a little bit. 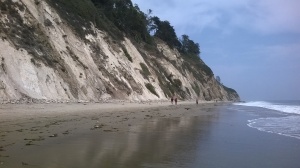 After enjoying some fish and chips at a nice restaurant on the beach, I biked back to my hostel and socialized on the patio once again with my hostel friends. My lazy day bike total was still pretty good – about 18km.