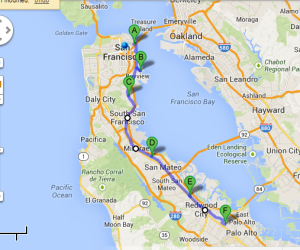 On Saturday, I hoped to cross the bay to the Oakland area for some cycling along the east side of the bay. I discovered I could use my Muni pass to get to Treasure Island halfway between SF and Oakland, and then take a bike lane on the second bridge to the other side. Unfortunately when I got there I found that the bike lane was still under construction (thanks a lot Google Maps). I almost accidently wandered into a high-security coast guard area in the process!

After I’d come to terms with the fact that I couldn’t be able to get to the mainland, I decided to bike around and see what Treasure Island has to offer. While the east side of the island was quite eerie, when I made it around to the other side it was bustling with activity. I had stumbled across the Saturday morning flea market! I decided to check it out for a while, and got a few souvenirs and lunch. When I got back into San Francisco in the early afternoon, I was feeling energetic so I decided to go on an adventurous ride down the west side of the bay. I decided I would bike as far as I could, and take the CalTrain back.

While the ride was not as scenic as I had hoped it would be, I still enjoyed a great view of the hillside and got some good exercise in the process. The wind was at my back and so I was getting great speed as I rode down the California 82 highway. Unfortunately I ran out of time before I ran out of energy, and I had to turn around to make sure I’d get back before dark. I ended my ride at Menlo Park, a small town just west of Paulo Alto, putting my total kilometres for the day at 69, setting a new personal best longest distance on my trip.

I boarded the CalTrain at Menlo Park towards SF. The train is very comparable to Toronto’s GO train – it’s a double-decker, frequent service commuter train that makes frequent stops as it connects San Francisco to San Jose. Something I was really impressed by was the acceptance for bicycles on the system; every train has two special bike cars in which the lower level is open with racks for bikes. Each car could easily fit 20 bikes, and there is no extra fee for bringing one on. An important take-away for GO Transit: bikes are also allowed during rush hour! I believe this is essential in giving commuters the option to take cars out of their commuting equation.

Though I was physically exhausted, I somehow found the energy and that night enjoyed some wine and drinking games with my hostel roommates. Needless to say it was a long day!