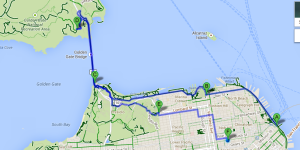 On Friday morning I was still bike-less, but luckily I received a call from Amtrak saying my bike would be in San Francisco around 11:30am. I decided to continue my transit adventure and ride one of SF’s world-famous cable cars. Luckily it was pretty early in the morning so the wait wasn’t too bad – the cars are more a tourist attraction than anything, on a busy day it can easily take 30 minutes of waiting in line to get on a car. 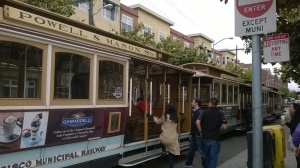 I took the car all the way down to the Fisherman’s Wharf. The ride was great! Unlike modern electric street cars, the cable cars function by latching onto a moving, underground cable that pulls it up the hill, much like a gondola at a ski resort. It certainly makes getting up SF’s majorly steep hills a lot easier.

I didn’t get too much time at the wharf, unfortunately, but it was very full of energy even at ten in the morning. I checked out a really cool arcade museum that was full of games going way back in time. Shortly after, I got on the waterfront streetcar and headed down to pick up my bike. At last I was reunited with my travel companion! Feeling energized from having a day off riding, I rode along the waterfront path to the Golden Gate bridge. Cycling over the bridge is a very popular activity, and the roads were full of cyclists. Fortunately, there was excellent infrastructure to accompany this – full protected two-way lanes for cyclists with clear signage of how to get to the bridge.

The bridge itself was immense! Built in the 30’s, the Golden Gate was an engineering marvel and for 30 years it held the title of the longest-spanning suspension bridge. The weather is also very different out there! What started out as a sunny warm day in downtown SF turned into a foggy, windy, and quite chilly ride across the bridge – I was definitely glad to have brought a coat. On a clear day, the view of downtown would be wonderful from the bridge; unfortunately the city was masked in fog from the bridge today.

When I got to the other side, I headed off the main stretch and headed to a steep hill to find a lookout. Unfortunately, all I found was more fog and even stronger winds (that almost blew me off my bike!). I did get to check out an old defence point for the city, dating back to the civil war era, which was pretty cool.

After I had had my fill of cold, I hopped back on my bike and rode back to the hostel. I decided to sign up for a pub night and went with a group of travellers to a bar in Chinatown where we participated in the “Beer Olympics”. While it was as lame as it sounds, I did get to meet some other travellers, a few of which were from Canada as well!

The Golden Gate was much more of a ride than I’d been expecting, and in total my bike mileage for Friday was 25km.