On Tuesday, after a beautiful flight over the Rockies, I touched down in Vancouver! My bike ride was relatively short, but it became exponentially tougher as I was loaded with about 80 pounds of gear. I was really impressed to find that the Vancouver airport features bicycle lanes leading up to it and leading into the city from there. The ride got a bit scary when my route basically turned into an automobile freeway (during rush hour), but once I got away from the airport I was able to find a bike lane and start to adjust to the bike network here.

My ride was relatively uneventful across South Vancouver, but once I made it over the hill, I got a beautiful view of downtown across the water with the mountains in the background. From there I crossed the Cambie Street bridge and biked along the Seawall to my destination. The Seawall was amazing! I’ll talk about it more in my Day 2 post. 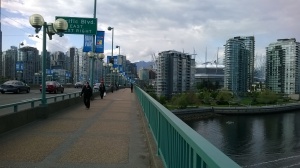 In total, Tuesday’s ride was about 18km. Time to start getting in shape!